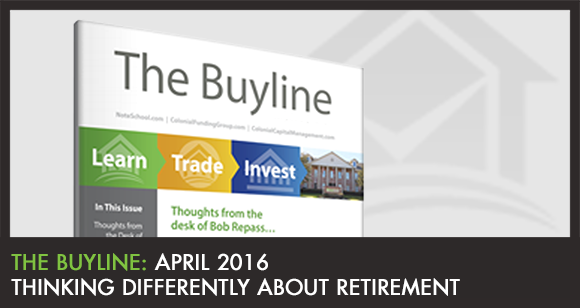 Thoughts from the desk of Bob Repass…

As I mentioned in this column a couple months back, I first started sending The Buyline newsletter to my clients, colleagues and prospects back in 1991, April 1991 to be exact thus making this month the 25th anniversary of The Buyline!

I want to share a pretty interesting story about what I guess you can call a “circle of life” moment I had this past month. My daughter, Kristin who graduated from TCU with a degree in Political Science just started a new job last month in Montrose, Colorado. Now to keep you from having to google it, let me just say it is a town of about 20,000 people on the western slope of Colorado in between Grand Junction and Telluride. Oh and did I mention a 14 hour drive from our home in Texas?

Needless to say Angie and I were a little apprehensive about moving our “baby” that far away and not knowing anyone there. But Kristin and I loaded up her car and took the 14 hour journey which actually was a great daddy-daughter bonding time. Did I mention Kristin is Daddy’s girl?

Now flashback to my time at Metropolitan Mortgage, in 1994 I hired a lady to come be my trade coordinator named Lynda Vaillancourt. Lynda and I worked together for several years and she eventually became one of my peers on the contract buying side. In the late 1990’s Lynda and her husband Paul moved from Raleigh, North Carolina to Colorado where she ran her own successful note investing company.

We have kept up over the years mostly through Facebook and Christmas cards. Something told me I should check with her and see what she knew about Montrose. So I called her before Kristin moved to tell her about it and she quickly informed me that she and Paul had moved to Montrose several years ago!

Angie and I could not believe it. We now feel so much better that there is someone in Montrose to help Kristin out if she ever needs it. One night while I was in Montrose after the drive up, we all had dinner together. It was so good to see my old friends again! And yes Kristin goes over to their house for home cooked meals on a regular basis!

Disclaimer: This is a discussion on the book Trump: The Art of the Deal not a political editorial.

I first read Trump: The Art of The Deal in 1990. I had just let my job as an Assistant Vice President at a bank in North Carolina and joined Metropolitan Mortgage & Securities as a Contract Buyer. Metropolitan was based out of Spokane, Washington and wanted to have a footprint on the east coast.

I left the stability of a bank executive to enter the world of deal trading and monthly commissions. It was a big adjustment but one that I have never looked back on with regrets. Deal making and loan trading is what I truly enjoy. It has been a great journey the past 26 years and I am looking forward to the next 26.

Mr. Trump has been front and center during this election season and to say his campaign has been “controversial” would be an understatement, and whether you love him or hate him, it’s hard not to acknowledge that he is a successful businessman. Trump states that deal-making is a combination of instincts and intelligence which I have learned to be pretty accurate over the years.

In one of the early chapters of the book, he outlines “The Elements of the Deal.” They are:

If there is only one chapter you have time to read, then I highly recommend his chapter. It is definitely a blueprint for being a successful entrepreneur, real estate investor and note investor. Trump sums up his style as “My style of deal-making is quite simple and straightforward. I aim very high, and then I just keep pushing and pushing and pushing to get what I am after. Sometimes I settle for less than I sought, but in most cases I still end up with what I want.”

Which Way Are You Going?

While traveling this week I read about a New Yorker rushing to the airport. It was Friday afternoon and he was just catching a cab at 4:30 pm for a 6:00 pm flight. Being raised in New York he jumped into the cab immediately giving directions to the driver in order to take the shortest route to the airport.

“What time is your flight?” Asked the driver and the passenger replied 6:00 pm. “Your way will never get you there on time.” Replied the driver, let me take you my way and you’ll be there in 21 minutes or it’s free.” How could anyone refuse?

The driver preceded down streets and alleyways the passenger didn’t know existed and 20 minutes later pulled into the terminal. “So”, the driver laughed, “What do you think?” Of course, the passenger left with the name and number of the driver who knew the most direct route while avoiding the most traffic to the airport on a late Friday afternoon. Not only was a relationship developed that day but a friendship was born.

Are you going the most direct route? The goal of the women’s mastermind is helping you find the most direct path to your goals using our experience in the note business. If you would like to join us this year or have an interest and would like to be on the contact list for future women’s events please email [email protected]

Let us help you find the most direct path.

As you get closer to retirement, whatever that means to you (age 45 or 65), it’s time to start thinking differently.

Apart from the mechanics of transitioning from reliance on active (earned) income to passive (investment portfolio-generated) income, there are mindsets shifts that, if embraced, will make the ‘golden years’ that much more enjoyable.

I’ve been reflecting on the theme of ‘thinking differently’ lately, partly due to a conversation with a good friend of mine who’s nearing retirement about her upcoming cross-country move. As we talked, I asked her if she planned to buy her next house with a mortgage. She replied, “Yes, of course.”

Her phrase, “of course,” caught my attention.

“Mortgage” (noun) from the Old French for “Death Pledge” (hmm…)

Her words reveal the way most of us think about our homes. When we move “up” to a more expensive home or “down” to a smaller one after the kids leave, or we’re just moving to a new place, the occasion almost always calls for a new mortgage.

On the positive side, of course, a mortgage provides a means of purchasing a home over time, and the current low interest rates make this less expensive than ever.

But consider the other side of having a mortgage payment, especially if it’s a large one…

As long as you’re on the hook for a house payment, you’re in thrall to the bank. If you take the ‘good debt vs bad debt’ approach, you could argue that a mortgage is ‘good’ debt. But it’s still debt.

I can still remember how it felt the day I took free-and-clear ownership of one of my homes.

Knowing that I had a place to live, for the rest of my life if I chose, without having to make another house payment EVER… was a major epiphany.

This feeling goes beyond numbers. It’s more than an overhead reduction. Eliminating my mortgage debt felt like I had been given the key that let me unlock a ball and chain that I had been dragging around my entire adult life. It was one of the experiences that gave me the courage to finally walk away from my corporate job and seek a life better suited to my heart’s desires.

I’m not really talking about your mortgage

I’m not trying to convince you to pay off your house. Not at all.

(In fact, occasionally mortgage debt is smart and can even be a form of asset protection.)

My point here is simply this:

As you approach retirement, you may want to begin to think differently about the self-imposed limits on your freedom. In the case of your residence, remember that it’s a use asset (not an investment) and until the day you sell it, it’s a liability in terms of cash flow.

Pay attention to those aspects of your life and financial picture that you assume you’re beholden to. Watch out for patterns of thinking like, “Of course I need a mortgage…”

What is freedom… to you?

Give yourself permission to imagine a life of true freedom…

When your vision is clear and compelling, you may start thinking differently… and allocating your current resources differently as well.

As always, please let me know if I can help move you closer to that vision of freedom.

Quote of the Month

“In the end, you’re measured not by how much you undertake but by what you finally accomplish.” – Donald Trump

Managing Director at Colonial Funding Group
Bob Repass is a 25-year veteran and expert in the seller finance mortgage and distressed asset industry. Over the course of his career, he has purchased over 40,000 performing and non-performing mortgage loans totaling over $2 billion dollars in volume, giving him an unparalleled track record in the industry. Mr. Repass most recently served as the President of Pathfinder Equity Holdings, LLC a mortgage consulting, loan trade advisory and real estate investment firm whose focus is to assist clients in realizing the maximum potential on their investments by improving acquisition returns, as well as loss mitigation and exit strategies.

Trump: The Art of the Deal 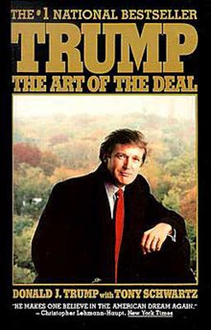